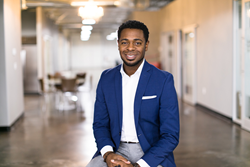 “The future of Dallas is in the hearts, hands and minds of our city’s youth. Byron Sanders has had a passion for our city’s youth for years. I applaud the board’s decision and believe he will lead Big Thought – and our city’s children – into this new era,” said Dallas Mayor, Mike Rawlings.

One of Dallas’ most respected education nonprofits, Big Thought, today announced that Byron Sanders has been named the next President and CEO of the organization.

Sanders joins Big Thought after serving as Vice President and Institutional Client Advisor for U.S. Trust where he advised nonprofit institutions on investment management strategy. He previously served as Executive Director of the Dallas Education Foundation and in 2011, helped lead Group Excellence, an educational services company, which was named the 5th fastest growing education company in the country and featured on the prestigious Inc. 500 list.

“After considering several exemplary candidates, the search committee selected Byron Sanders as Big Thought's next Chief Executive Officer,” said Terri Simoni, Big Thought Board Chair. “Byron is a recognized and innovative leader who knows first-hand how critical it is for us to close the opportunity gap and prepare the children in our community for future success in this era of accelerated change.”

“Big Thought’s work to close the opportunity gap resonates personally with me,” said Sanders. “I grew up in southern Dallas and I benefited from programs very similar to what Big Thought provides to Dallas students. Today we are at a critical juncture. Closing the opportunity gap means that in addition to high-quality education programs that unlock creativity, we also must provide our children with social and emotional learning skills that will prepare them for careers that are yet to be created,” Sanders explained.

According to the U.S. Department of Labor, 65 percent of today’s schoolchildren will ultimately work in a job or career that doesn’t exist today.

“The future of Dallas is in the hearts, hands and minds of our city’s youth. Byron Sanders has had a passion for our city’s youth for years. I applaud the board’s decision and believe he will lead Big Thought – and our city’s children – into this new era,” said Dallas Mayor, Mike Rawlings.

This announcement comes as Big Thought celebrates 30 years of serving the Dallas community. Big Thought has been a key contributor in improving education in Dallas since 1987. Originally an arts organization, today Big Thought builds nationally recognized educational systems and coordinates partnerships to develop in-school and out-of-school-time programming that sparks the imagination.

In November, Big Thought, Dallas ISD, the City of Dallas and more than 500 school, city and community partners celebrated the results of a successful summer of learning, serving 69,411 participants through a coordinated city-wide learning system.

“Byron’s personal background and personal journey have prepared him to lead Big Thought into the future. Big Thought is a long-time valued partner of Dallas ISD and a significant innovator in our city. We’re looking forward to working closely with Byron on the many collaborative programs that serve the students in our community,” said Dallas ISD Superintendent Dr. Michael Hinojosa.

About Byron Sanders
Byron Sanders is a graduate of the University of Tulsa with a B.A. in Business Administration and Marketing. In addition to his work in the financial and educational arenas, his civic leadership includes many high-impact boards such as United Way’s Community Impact Council, Social Ventures Partners Dallas, CitySquare, and The ChildCareGroup.

Sanders is a recipient of the 2014 Dallas Business Journal’s Minority Business Leaders and 40 Under 40 awards. In 2017, he became a Presidential Leadership Scholar. Sanders resides in the Dallas-area with his wife Celeste and their two young children. Sanders has worked with Big Thought in various capacities since 2008, as a supporter, volunteer, adviser, partner and most recently, board member.

About Big Thought
For 30 years, Dallas-based education nonprofit Big Thought has worked with local and national partners to ensure all students have access to creative learning opportunities that prepare youth for success in work and life. Big Thought brings relentless optimism, innovation and imagination to the biggest problem facing education today: The Opportunity Gap. The organization’s programs and services are designed to make imagination a part of everyday learning, through after-school, in-school and summer learning opportunities. Together with its partners, Big Thought offers students access to personalized, high-quality, creative learning experiences that form the foundation for the crucial job and college readiness skills necessary for the future. Learn more at bigthought.org.